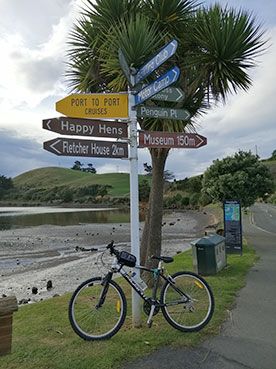 Otago Harbour is located in Dunedin city in the southern part of the South Island of New Zealand. Dunedin is around 400 kilometres south of Christchurch and 300 kilometres north of Invercargill.

The harbour, surrounded by sandflats and hills on both sides and islands marking its midway point, is approximately 22 kilometres in length. It extends from Dunedin's Steamer Basin, central city, in a northerly direction towards the Taiaroa Head Nature Reserve at the harbour entrance. Port Chalmers is located on the west side of the harbour and the Otago Peninsula lies to the east.

The cycle trail extends up the west harbour past Port Chalmers township and main container shipping port and towards Aramoana sandspit. The winding road along both sides is bordered by a safe specially designed cycle trail of 54 kilometres in total length. It allows cyclists to enjoy some of the best views in Dunedin. From inner city Dunedin, towards the Harbour entrance, cyclists can choose from a flat cycle route to more breathtaking views, for those that choose to venture uphill.

Although 54 kilometres in total length, the route can be shortened to suit everyone. The Loop can be completed by catching the Port To Port cycle ferry between Back Beach, Port Chalmers and Portobello. By cycling to one of these departure points and ferrying across the harbour, the distance for cycling is approximately 31 kilometres.

The roads are mostly flat and winding, however with options of venturing uphill for those wanting a challenge, giving exceptional opportunities for photography and stops at local cafés, attractions and shops along the way. There are beaches that can be explored nearby and plenty of birdlife and harbour activity to observe on route.

The yellow line is completed cycleway and the red line in currently unfinished cycleway.